An Important Prophecy of an American Female Foreteller Florence

The world-renowned American Foreteller Florence has mentioned India several times in her prophecies. In her book named ‘The Fall of Sensational culture’, she has written that around the year 2000 A.D., the balance of nature will deteriorate in a fearsome manner. There will be a strong feeling of resentment in people. Misconduct will reach its peak. Those who lead a luxurious life in western countries will have disappointment, restlessness, and unrest.

Unfulfilled desires will escalate. Due to which mutual bitterness will rise. There will be an environment of violence and vandalism everywhere. There will be such an environment that there will be an outcry everywhere. But a new ideology emerging from India will end this deadly atmosphere. That ideology will explain the importance of harmony and brotherhood with a scientific viewpoint. It will also explain this: that there is no mutual conflict between religion and science. It will bring to light the supremacy of spirituality and the hollowness of materialism in front of everyone.

The middle class will be influenced by that ideology. This group will inspire all the groups of the society towards the development of a good society.
This ideology will bring a miraculous change in the entire world.
I am perceiving with my sixth sense that the Great Saint who will give rise to this viewpoint has taken birth in India. The influence of the brilliant personality of that Saint will amaze everyone. His ideology will again give new vigor to the decreasing influence of spirituality. There will be a spiritual atmosphere everywhere.

The people influenced by the ideology of that Saint will move towards the west for the welfare of the world. They will gradually spread completely in Asia, Europe, and America. The entire world will be impressed by the viewpoint of that Saint and will walk on his footprints. People of the western countries will believe him to be Jesus, the Muslims will believe him to be a true guide and the people of Asia will regard him as an incarnation of God.

An intellectual revolution will occur from the ideology of that Great Saint. The beliefs of the intellectual people will change. Shoots of devotion and faith towards God will sprout in them.
According to Florence, Saint has taken birth in India. She was very much impressed by this Saint. She has also written in another book of hers “Golden Light Of New Era” – “When I meditate, then I frequently see a Saint. He is fair-skinned. He has white hair.

He doesn’t have a beard or a mustache on his face. That Saint has a splendid radiance on his forehead. Rays of light of a heavenly body from the sky constantly keep falling on his forehead. I see that, that Saint with the power of his auspicious viewpoint and the followers endowed with good character, is spreading the light of new knowledge in the whole world.
That Saint is constantly increasing his power. He has so much power in him that he can also cause a change in Nature. He will perform his work in a scientific manner. By his grace and endeavors, a new awareness will come in human civilization. A new consciousness will arise in all the masses of the world. A new form of people’s power will emerge before everyone which will put a restraint on the arbitrariness of those in power.”

World-renowned Psychiatrist and Hypnotist Dr. Morey Bernstein was a good friend of Florence. Once, she had also said to him, “Doctor, that time is approaching very quickly when the society will listen to the statements of social workers like you more carefully than that of the power-greedy politicians.

By the arrival of the 21st century, a new ideology will influence the entire world. Organization of religious people with good character in very Nation will change the wrong beliefs in people’s minds.

This ideology will blossom from India and from there only will spread in the whole world. I am seeing an intense ascetic on that holy place whose brilliance is spreading very quickly. That saint is trying day and night to awaken the dormant divinity in human beings and to make the Earth like heaven.

A journalist had asked Florence in 1964 whether she can tell the future of the world. In its reply, Florence had said, “The beginning of 1970 will take place with extensive upheaval. After 1979-1980 such earthquakes will occur that some part of New Jersey and places of many countries of Europe and Asia will be torn apart by the earthquake. Some will get submerged in water. The terror of third world war will set in everyone’s mind, and they will prepare for this war, but Indian politicians with their influence and intellect will become successful in averting the third world war.

Until the advent of the third world war, the reins of India’s control will be in the hands of people with spiritual disposition; therefore, the world war will be averted by their influence. Those rulers will be impressed by the brilliant and revolutionary thought of a Great Saint. They will be submitted to that Saint in the same way as Washington was submitted to independence and humanity.”

Florence, a resident of an American city, New Jersey, was really an extraordinary woman. Once, a man called ‘Nebel’ asked her during a T.V. program, “Often you tell about the Saint who has taken birth in India. I would like to know something about me. Please tell.”

Florence held his right hand and said, “Very soon you will broadcast from another state.” Nebel was an employee of a broadcast service. He started laughing on this comment of Florence. After a few moments, he said, “You have cracked a good joke on me. If the officials of my company are watching this program, then whether I may go to another state or not, but for the time being, I would be immediately expelled from the company. “ A few minutes later, the phone of T.V. control room started ringing. The phone was for Nebel. The General Manager of his company wanted to speak to him. When Nebel picked up the phone, then he said, “We have decided to commence broadcasting from New York. You only will be sent there. Keep this a secret at the moment. It will be declared tomorrow. I was watching your interview with Florence on T.V. whatever Florence has told about you is completely true. I am surprised that how did she come to know about it?”

Nebel kept looking at Florence’s face. Some journalists had once asked her how does she see the future, and how does she locate missing people or things, then Florence told, “I myself don’t know how it becomes possible. I am telling a very important thing about the future. At the end of the 20th century, a light will emanate from India. This light will give information to the whole world about those divine powers, that have remained mysterious for all of us until now. (Please read the information about the divine powers given by Saint Rampal Das Ji Maharaj in this very book on page 29. “Creation of Nature“.)

Florence has repeatedly mentioned about this Saint or divine Great man. Besides, she has also told that he is present in a holy place of Northern India. Gentlemen!

The abovementioned is a future prediction and a current statement which proves true on Supreme Saint Rampal Maharaj Ji, and other prophecies that are written ahead also support this. 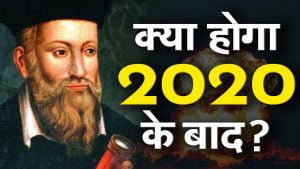 Top 10 Predictions by Nostradamus in English

Prophecy of Prahlad Regarding a Great man in “Janam Sakhi”