a manifestation of a deity or released soul in bodily form on earth; an incarnate divine teacher.

The meaning of “Incarnation (Avtaar)” is “to descend from a higher place to a lower place”. Especially, this auspicious word is used for those supreme souls who perform some remarkable activities on earth; who are considered to be sent by God or is considered to be the arrival of God Himself.
In Shrimadbhagvat Gita Adhyay 15 Shlok 1 to 4 and 16-17, there is knowledge of three Purushs (Gods).

By the attainment of this very Supreme God, a worshipper will attain supreme peace and eternal supreme abode. Evidence is in Gita Adhyay 18 Shlok 62. This Supreme God (Param Akshar Brahm) is distinct from the Speaker of the knowledge of Gita. To gain further knowledge, please obtain the book “Gyan Ganga“ from Satlok Ashram, Barwala. Incarnations are of two types as stated above. Now you have come to know that there are chiefly three Purushs (Gods), who have already been mentioned above. Mainly two Gods play a role for us.

Like in Shrimadbhagvat Gita Adhyay 4 Shlok 7, the Speaker of the knowledge of Gita says whenever hatred arises in righteousness, damage of righteousness occurs and there is an uprise of unrighteousness, then I (Kaal=Brahm=Kshar Purush) create i.e. give rise to my part incarnations.
Like, Kaal Brahm only had given birth to Shri Ramchandra Ji and Shri Krishna Chandra Ji on earth, who are considered to be Vishnu Ji himself.
Apart from these 8 more incarnations have been stated, which Shri Vishnu Ji himself does not come, rather sends his worthy pious souls from his lok1
. They are also known as incarnations. At some places in Purans, there is also mention of 25 incarnations. The incarnations of Kaal-Brahm (Kshar Purush) destroy the risen unrighteousness on earth through a massacre.

For example – Shri Ramchandra Ji and Shri Krishna Chandra Ji, Shri Parshuram Ji and Shri NiHkalank Ji (who is yet to come, who will come at the end of Kalyug) – all these incarnations destroy unrighteousness by causing a fierce massacre. By killing unrighteous people, they try to establish peace. But instead of peace, unrest rises. Like, Shri Ramchandra Ji fought a battle to kill Ravan. Crores of men were killed in the battle, in which righteous and unrighteous both were killed. Then their wives and small children were left behind whose lives became hell. Other men made those widows victims of their lust. The problem of subsistence arose etc-etc. Numerous such reasons for unrest came up. This very method was adopted by Shri Krishna Ji and Shri Parshuram Ji had also used a similar technique. The tenth incarnation will be produced by Kaal Brahm (Kshar Purush) by the same method. His name will be ‘NiHkalank’.

He will be born at the end of Kalyug and will be the soul of King Harishchandra. He will take birth in Sambhal City in the house of Shri Vishnu Dutt Sharma. At that time, all human beings will be tyranted and unjust. He will kill all of them. At that time, some of the individuals, who will have fear of God, will be virtuous. He will leave them and will kill all the rest. This is the technique of the incarnations of Brahm (Kaal-Kshar Purush) to destroy unrighteousness and establish peace. 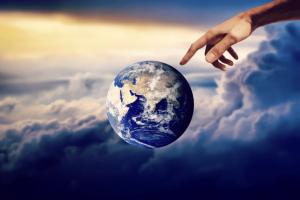 How to make this earth heaven? “Satyug in Kalyug”